When I found out a former roommate was going to have a baby, I was excited. I had known her since before she had met her husband, so I had the unique privilege of watching her family story unfold. I wanted to gift her with something special—something that would show I still considered her a good friend, even though we no longer live in the same city. Since she grew up overseas, I reasoned that people would be more likely to send cash or other items easily sent via mail. I thought it a tragedy that her baby wouldn’t have anything homemade. Having grown up on a farm with many homemaker moms as aunts and a seamstress grandmother, plus countless crafty distant relatives, I had crocheted AND knit baby blankets, lots of clothes, bibs, etc. So I made it my personal objective to make something for the baby.

Never mind that I hadn’t really sewn anything before. My grandma taught me how to use a sewing machine when I was little. She is probably also how I learned to knit and crochet, although I barely remember how and never learned to start the first row. The extent of my sewing skills was basically holding fabric scraps against Barbie dolls, hand stitching an outfit inside out, and learning through osmosis when my mom was going through one of her crafty phases. Still, how hard could it be?

I had a moment of brilliance when I started. I decided to make a “practice quilt” before starting on the baby’s project so I wouldn’t totally screw hers up. That practice quilt is now known affectionately as the Ugly Quilt and still isn’t finished. My first square—which I quickly learned from google is called a “block”—wouldn’t lay flat. I had to google a whole new set of block options that weren’t so involved. Only later did I find out that even professional quilters use tricks (like breaking parallelograms into triangles) to sew their blocks more easily. Tell me which version below looks easier:

(In case it’s not obvious, I tried version 2 with the Ugly Quilt.) This is the difference between the way version 2 bubbled versus the comparatively little bubbling after I adapted:

Once I settled on an easier pattern for the baby quilt, things went much more smoothly. I used simple squares:

Since my old roommate and her husband use nicknames for each other (in Gujarati) that are birds, I selected a variety of bird-related prints. One of the birds I incorporated was an owl because she remembered I wore owl socks to the bar exam the year we lived together; it was a way for me to be part of the baby’s life! Considering how little experience I had (AND HOW LITTLE MEASURING I DID!), I was excited by the result. 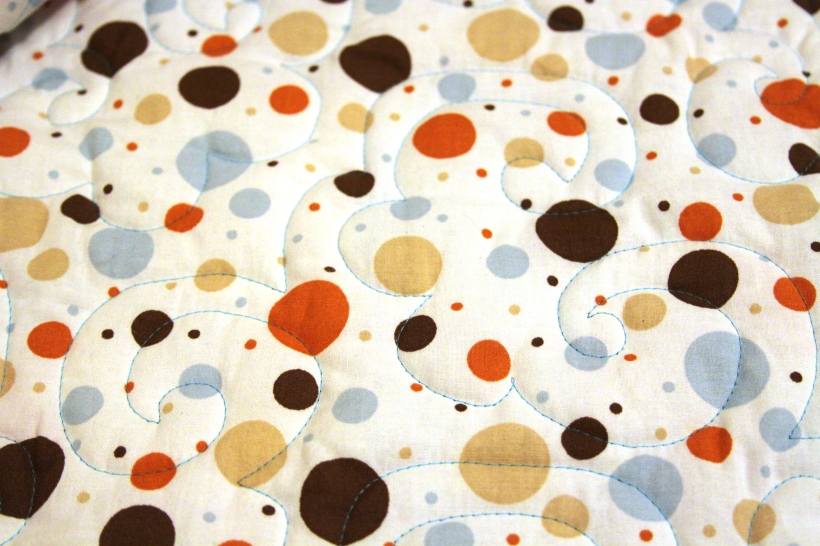 And finally, a progress shot:

I have been an avid Pinterest stalker and google searcher ever since, always looking for inspiration either to copy with my own fabrics or to incorporate into an otherwise original idea. I hope my skill improves with each project. I’m impatient, so improvement may prove a little slow!

2 thoughts on “How I Started Sewing”