This past weekend, I attended a great event hosted by the D.C. Modern Quilt Guild at the Anacostia Arts Center. Speakers were Katie Clark Blakesley, one of the authors of Vintage Quilt Revival, and Laura Gunn, artist, “color expert,” and fabric designer.

The combo of these two speakers was pretty great! On one hand, Katie talked about updating traditional designs with bright colors and using neutrals or inversing colors in a quilt block to change the aesthetic. Here she is with her Cut Glass Baby Quilt, which is featured in the book. 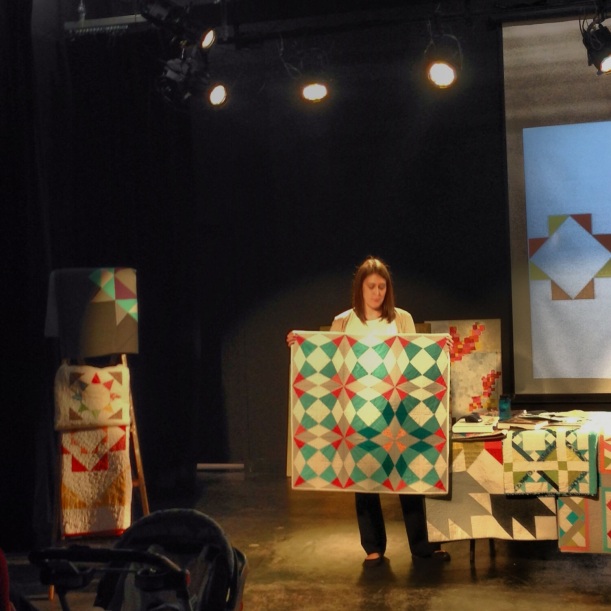 Then Laura showed us how to make a color look brighter or darker based on the colors around them. I knew that certain palettes work and some don’t, but it was frankly mind-blowing to think of starting a quilt design not with a group of similarly-sized color chips, but with colored pieces spread out across a board. (Perhaps that’s how some people use their design walls, but I just hang up finished blocks and see after-the-fact whether it looks like I planned it out on the computer.)

Here, Laura shows how cream and aqua look different based on background color.

Audience members got involved and helped create a palette/design.

Vintage Quilt Revival was on my wish list for quite awhile, but I didn’t let myself buy it until just before the event because the anticipation ensured I wouldn’t stay home sewing at the last minute, haha. It was surprisingly better than I’d hoped it would be.

I have been working through my own design processes lately and wasn’t too keen on starting  a new quilt from a pattern before testing out some new designs of my own, but I have to admit, I think the book convinced me otherwise. It has big, glossy pictures. And even if a particular block is less appealing than another block, each block also comes with tips that can be applied to any quilt design. Even the brief “Did you know…?” type discussions about the history of quilting were interesting. Liberty Love has my favorite quilt design so far, the Marcelle Medallion, but I think Vintage Quilt Revival is my favorite quilting book.

Following the event last weekend, I set about trying to plan out a quilt not with a palette, but with color placement, using some of the blocks featured in the book.

I love the Riviera block, and especially the versions made by Holly at Bijou Lovely and Karen at Lady K Quilts. I figured I would start easy, making mostly black and white Riviera blocks with one or two blocks in color to break things up. Then I realized I didn’t like that the secondary pattern, which looks like a spiderweb to me, was more prominent than the stars in the center of each block. 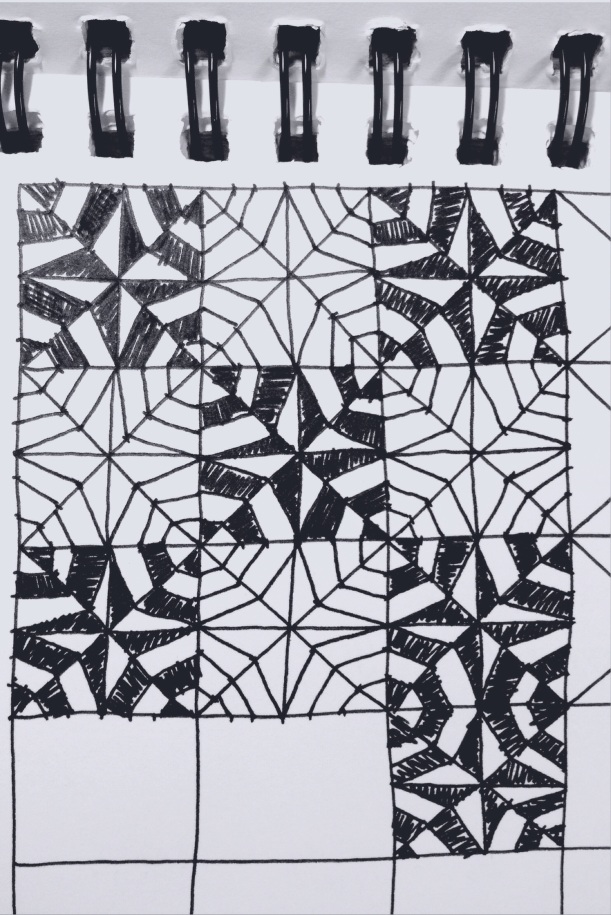 The Stardust Quilt featured in the book includes both the Riviera block and another block, the Dakota Star block. Although I love the Dakotas as a geographical location, the quilt block is not my favorite. I decided to use the same concept: the Riviera paired with another block, but mine is the Geometric Star (from the Cut Glass Baby Quilt, my favorite quilt in the book).

I started with my B&W Rivieras.

Next, I thought I would add modified primaries: mustard yellow, rusty/dark red, and a dusty blue. 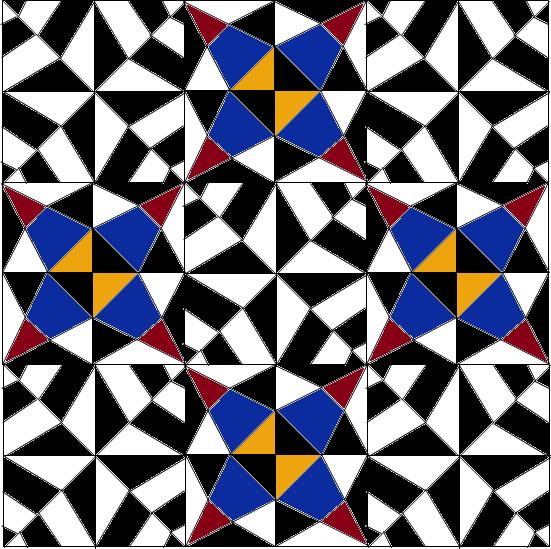 I wasn’t sure I liked it. Let’s make those colors brighter! 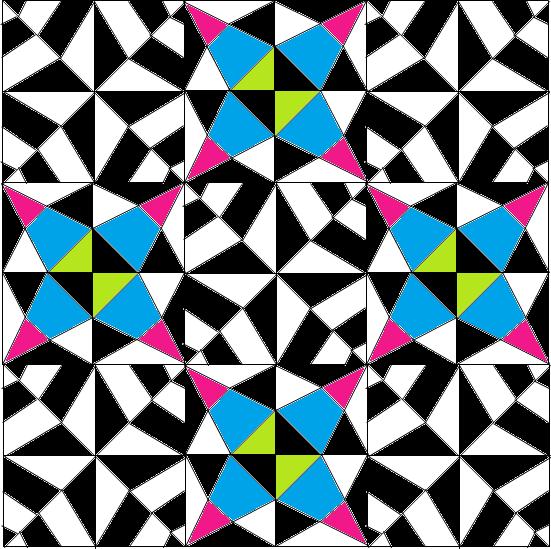 Now what if we add some color to the center block?

Hmm, not sure I liked that. What if we just mix up the colored blocks, switching out the pinks and greens on two of them?

I liked that a little better, but I still wasn’t sure it was quite right. I decided to change my block placement so there were two color/star blocks (each)  in the top and bottom rows, one in the center, alternating with the Riviera blocks.

That was my favorite iteration, but I still wasn’t sure I wanted to go to the effort of sewing those blocks in that formation. I decided to try again, this time with the Double Windmill block.

Again, I tried to mix a black and white concept with a few blocks of color, and I tried to invert the background of one of the blocks. I made a second attempt, too:

In the end, I think I still want to play with the Cut Glass Baby Quilt design. Did I mention it’s my favorite? But I really enjoyed starting with color instead of with fabrics for once.

Coming off the successes of my first two projects, I wanted to make something (a) I didn’t have to give away; and (b) with modern color or design that flies in the face of the more cautious approach I use daily as a lawyer. It was also important not to get so excited about fabrics that color would transform into the nasty mess that is my Ugly Quilt. I thought that by limiting myself to a gray palette, I could accomplish all these goals.

The first obstacle was that although I knew what a palette is in theory, I didn’t know what one looked like in an actual project. What became one color too many? A girl I knew from high school posted on facebook about some of her projects, and I somehow found the gumption to contact her, even though I didn’t know her really well. She was sweet. She directed me to some websites and sent some color wheels of her own.

My next step was searching for fabrics (online since my local fabric store is meh) with gray in them. That’s when I really discovered how trendy gray is right now. There were grays and reds, grays and aquas, grays and yellows, grays and tangerine… the combos were endless. Then I had an idea: grays and primaries, variations on a theme. I selected fabrics with reds, aquas, and butter.

The quilt design was inspired by the Purl Bee, a blog my high school classmate helped me find. While I waited for fabrics to arrive over the course of the next few weeks (which felt like a decade!), I created a template on my computer: 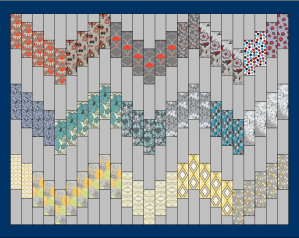 One thing I love about people who work with sewing and/or crafts? They’re so darn friendly! Even the fabric I received from online purchases came with cute little cards, thank you notes, ribbon, and in one case even a teeny-tiny origami crane! 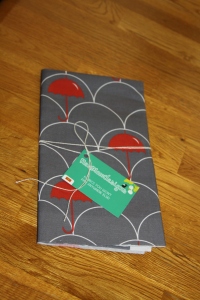 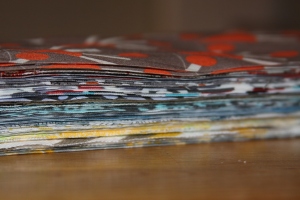 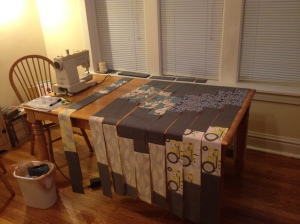 As with my first quilt, I got help finishing my quilt. I requested simple, stitch-in-the-ditch (i.e. stitching along the seams instead of big, looping designs) quilting. I didn’t want to detract from the fabrics I had so painstakingly selected. The woman who did the work told me her quilting friends all protested that my quilt was too plain but that she understood what I wanted and was going to deliver. And she did. I kind of like plain. And I love my quilt (photographed in my parents’ house).

Unfortunately, the box I used to ship the quilt to the woman who finished it had grease stains I didn’t notice… until the final product carried telltale signs. Preliminary research (again, google) suggests dry cleaning solution might work without ruining the quilt. Here’s hoping! I’ll post results if it works.

UPDATE: The dry cleaning kit I used worked surprisingly well! I wasn’t too optimistic about getting a grease stain out.