Some sweet friends of mine were married this summer. I was sad I couldn’t attend their wedding, so I knew I wanted to do something extra special for them in addition to a normal gift. I decided to finally try my hand at an embroidered portrait.

I actually gifted the couple with the portrait at my own wedding because it was the only time I expected to see them this year. It felt tacky to me, but I was too excited not to share! The down side is I didn’t manage to take detailed photos of the finished project because I was too busy doing other wedding-related things.

It was a lot of fun to make, and I’m thrilled it went as well as it did. As always, I learned a few things I’d do differently next time… if there is a next time! I worried the portrait could be received poorly, especially if my poor art skills meant one of the two looked deformed when I was finished; the final few stitches can ruin hours of work. I’m happy with this portrait, but I’m not sure I’d put myself through the mental anguish again!

I’m in the middle of many projects right now, but they’re taking so long to finish! As a treat, I decided to work on a project I knew would only take a few days.

Lucky Jackson does some neat embroidered portraits with two or more fabrics. I knew if I drew an original portrait or did anything very involved, it would quickly go from a 2-day project to another of the unfinished projects that make my head ache. Instead, I decided to try to apply the technique to clip art.

My boyfriend was recently offered a job with the U.S. government. His favorite time of day is the morning when he’s drinking his coffee and reading internet news. With the new job, I probably won’t see as much of him during this golden part of his day. I decided to make him a notebook cover. In the notebook, he can jot thoughts or follow-up notes from his online foray. He’s in his 30s but jokes about being a doddering old professor someday, so I thought this image, which I found for free online, would be perfect. I added the coffee cup.

I saw a product at the store that would’ve prevented fraying, but I’m okay with the way it turned out. I was equally lazy in tracing the notebook and adding a seam allowance instead of doing the proper measurements. I’m not bothered. If I try the technique again, I’m sure the next one will be better. 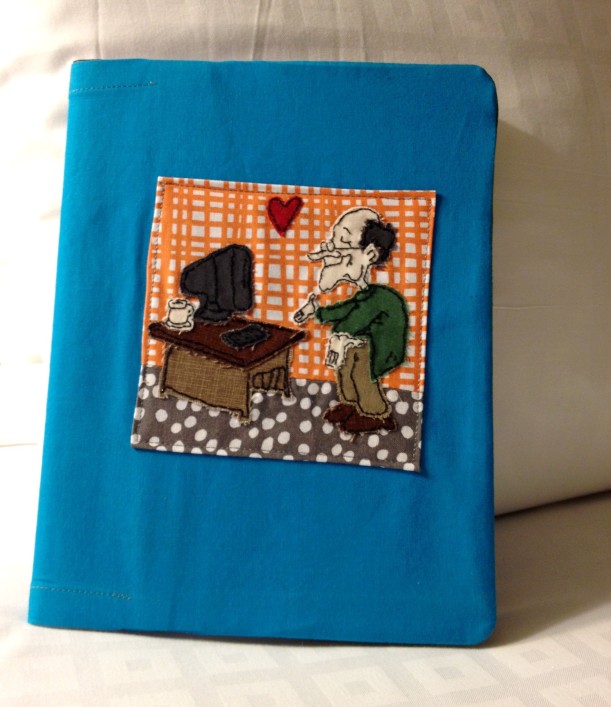 It’s so rewarding to finish a project! Frankly, I doubt my boyfriend will use the notebook much. It’s not really something you whip out in front of your professional colleagues. But he knew I was thinking about him and had a smile.