I posted before that my sister loves owls. I wanted to make her one last Christmas gift with that theme and decided on the Madeleine purse tutorial I found on Pinterest. A woman with blue hair (read: probably more creative than I am) at the fabric shop told me the owl fabric I picked was cool. That made my day!

Then the project turned into a nightmare.

At the Quilt Expo, I attended a class by Nancy Zieman of Sewing with Nancy. She had this great trick for using Steam-a-Seam-2 (“SAS2”) instead of normal interfacing on certain projects. I had trouble the first time I used interfacing, compared with a stunning victory when I tried SAS2 for the next project. I decided I would save myself a headache by using SAS2 for the purse project… and learned that Steam-a-Seam has its limitations.

First, my sewing machine hates sewing through paper. I see all kinds of cute projects online and have even attempted a few, but alas, I make it about 2 inches into the project and throw my hands up in despair at the hundredth broken thread. (Preempting: Adjusting tension, stitch length, needle size, etc. doesn’t help.) When sewing through two interfaced layers of the purse, I was also sewing through 2 layers of paper, plus the sticky interfacing itself. My needle was gummed up and the thread broke constantly. Not fun. I even experimented with removing the paper in favor of a tape and wax paper concoction. (Worse!) And toward the end of the project, I had to figure out how to get the paper out from between the lining and the exterior after flipping the purse right-side-out. (Solution: I removed the paper in advance and hand sewed the seam! I hate hand sewing stitches that are not even visible when the project is finished!)

The tutorial itself was pretty good. However, I strongly urge a better interfacing selection if you decide to try this project. Some additional points of clarification:

1. The pleats are not box pleats (both left and right sides tucked toward a center point). You can just bring the pleat lines together and fold either right or left. Be consistent with your direction.

2. On the final sewing step (sewing the lining and exterior together), the wrong side of the lining should be the outermost layer (clear in the pattern) and the purse exterior, which is tucked into the lining, should have the sticky/interfaced side out, with the front side of the bag facing in toward the lining. It’s possible I did a fantastic job of attaching the two, double- and triple-securing the strap, only to find the exterior was facing the wrong direction… 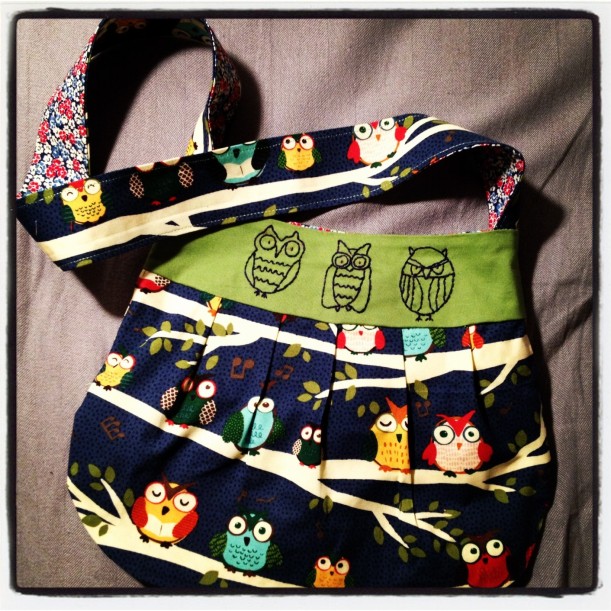 As an added bonus, I did the owl embroidery (patterns here) while my sister was sitting right next to me! She was just home from the ER, I had food poisoning, and we were too self-absorbed to worry about each other while we watched Christmas movies together. About 45 minutes after I started, she asked what I was working on, and I told her it was a project for another friend. She didn’t ask to see it! Whew!

When I was all finished, I had to wipe down with rubbing alcohol all the pins that had secured the interfaced pieces. They were extremely gunked up!

My first sewing project was a quilt–an ambitious project considering I didn’t even know how to thread my sewing machine. I had intended it to be a baby blanket, much smaller in size. Then I started thinking how a small blanket would be outgrown quickly, so I expanded the idea, ensuring my [forced] position in the baby’s life forever!

With plenty of leftover fabric scraps at the end of Project 1, I found that for my second project, I could revisit the idea of a baby quilt. I found a more advanced block (than squares, so it’s not saying much) to challenge myself, made it big, then googled binding. (For my original quilt, I hired help. I don’t think my poor, tired sewing machine could have handled a big quilt.) Purl Bee had some great instructions! 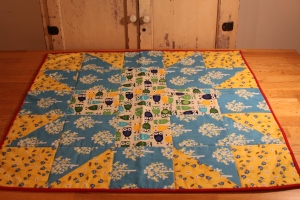 When I found out a former roommate was going to have a baby, I was excited. I had known her since before she had met her husband, so I had the unique privilege of watching her family story unfold. I wanted to gift her with something special—something that would show I still considered her a good friend, even though we no longer live in the same city. Since she grew up overseas, I reasoned that people would be more likely to send cash or other items easily sent via mail. I thought it a tragedy that her baby wouldn’t have anything homemade. Having grown up on a farm with many homemaker moms as aunts and a seamstress grandmother, plus countless crafty distant relatives, I had crocheted AND knit baby blankets, lots of clothes, bibs, etc. So I made it my personal objective to make something for the baby.

Never mind that I hadn’t really sewn anything before. My grandma taught me how to use a sewing machine when I was little. She is probably also how I learned to knit and crochet, although I barely remember how and never learned to start the first row. The extent of my sewing skills was basically holding fabric scraps against Barbie dolls, hand stitching an outfit inside out, and learning through osmosis when my mom was going through one of her crafty phases. Still, how hard could it be?

I had a moment of brilliance when I started. I decided to make a “practice quilt” before starting on the baby’s project so I wouldn’t totally screw hers up. That practice quilt is now known affectionately as the Ugly Quilt and still isn’t finished. My first square—which I quickly learned from google is called a “block”—wouldn’t lay flat. I had to google a whole new set of block options that weren’t so involved. Only later did I find out that even professional quilters use tricks (like breaking parallelograms into triangles) to sew their blocks more easily. Tell me which version below looks easier:

(In case it’s not obvious, I tried version 2 with the Ugly Quilt.) This is the difference between the way version 2 bubbled versus the comparatively little bubbling after I adapted: 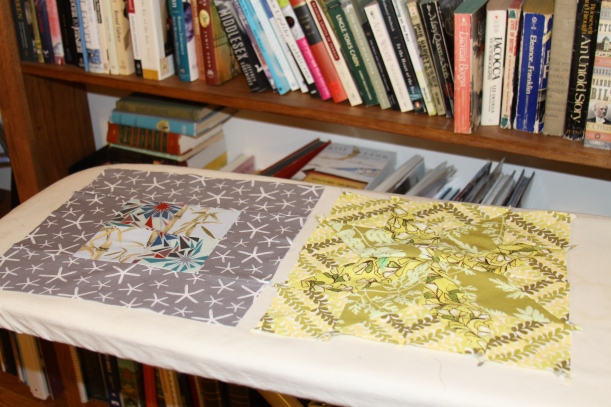 Once I settled on an easier pattern for the baby quilt, things went much more smoothly. I used simple squares: 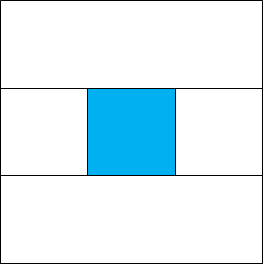 Since my old roommate and her husband use nicknames for each other (in Gujarati) that are birds, I selected a variety of bird-related prints. One of the birds I incorporated was an owl because she remembered I wore owl socks to the bar exam the year we lived together; it was a way for me to be part of the baby’s life! Considering how little experience I had (AND HOW LITTLE MEASURING I DID!), I was excited by the result. 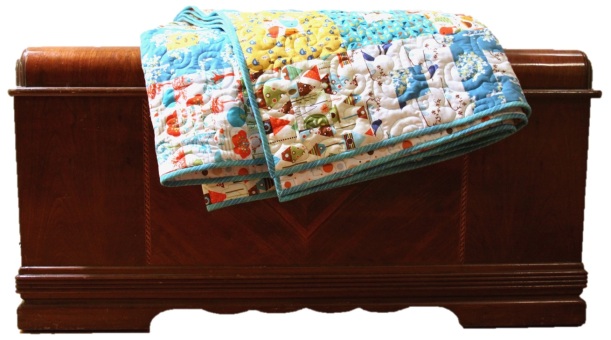 And finally, a progress shot: 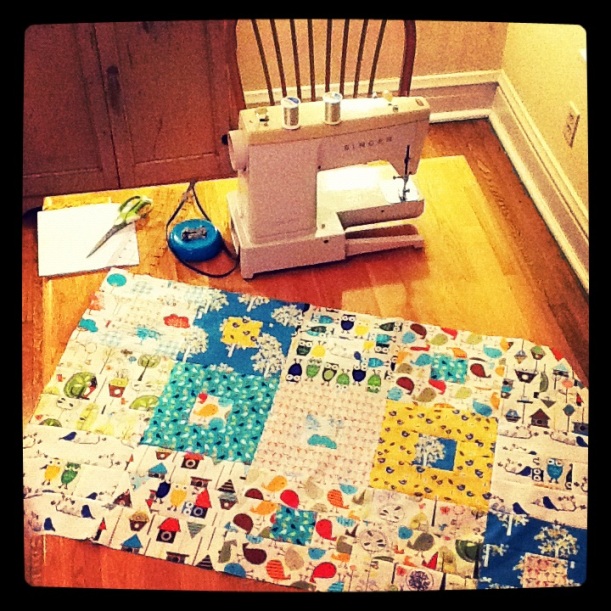 I have been an avid Pinterest stalker and google searcher ever since, always looking for inspiration either to copy with my own fabrics or to incorporate into an otherwise original idea. I hope my skill improves with each project. I’m impatient, so improvement may prove a little slow!