Early in my newfound sewing inspiration, I spent a lot of time on the Purl Bee website. I fell in love with their receiving blankets project, bought some flannel and wool, and put the materials in my projects box to gather dust. Since I’ve spent the last few weekends traveling for work, I have really missed my creative outlet. I decided to resurrect the project because it is mobile, unlike my million ton 1970s sewing machine. This was also a good project because I have decided I have to finish most of my current projects before doing anything new… and I have lots of new ideas!

But this project didn’t quite go as planned.

First, the flannel was a pain to sew. You have to fold the edges under so they don’t ravel, and since it’s a baby blanket, I figured it was too small to bother with changing out my needle, etc. The result was that my thread broke at each of the four corners, sometimes more than once. Ugh.

Next, I thought winding my beautiful wool yarn into a ball would take about 10 minutes, so I started it as a relaxing exercise 10 minutes before I wanted to go to bed. The final ball, sans the last several yards that got tangled and were cut from the rest after some cursing, took an hour and a half.

That was just the preparation to make my project mobile.

While I love the creativity of Purl Bee, I found these instructions a little confusing for someone who has only ever crocheted a few lines, and those several decades ago. I’m not saying Purl Bee did a bad job; I was just had trouble following instructions that took a few minor details for granted. I would have liked some comments of affirmation and a little further instruction, such as:

When starting the project, don’t worry about that tail of yarn. It’s supposed to be there. You’ll take care of it later. It won’t cause the rest of the crocheting to unravel, I promise.

You know, those sorts of helpful hints. Also, I didn’t like working with such thin yarn, as it was tricky to get one loop through another with such a mischievous, tiny needle. It was easier to catch strings of the flannel than it was the yarn!

I am finally finding my groove. It’s fun being able to work from my car over lunch breaks – makes me really look forward to them. And I learned some valuable tips about crocheting. (For example, my cup holder is the perfect size for a ball of yarn.) I expect my next project should go better as a result. 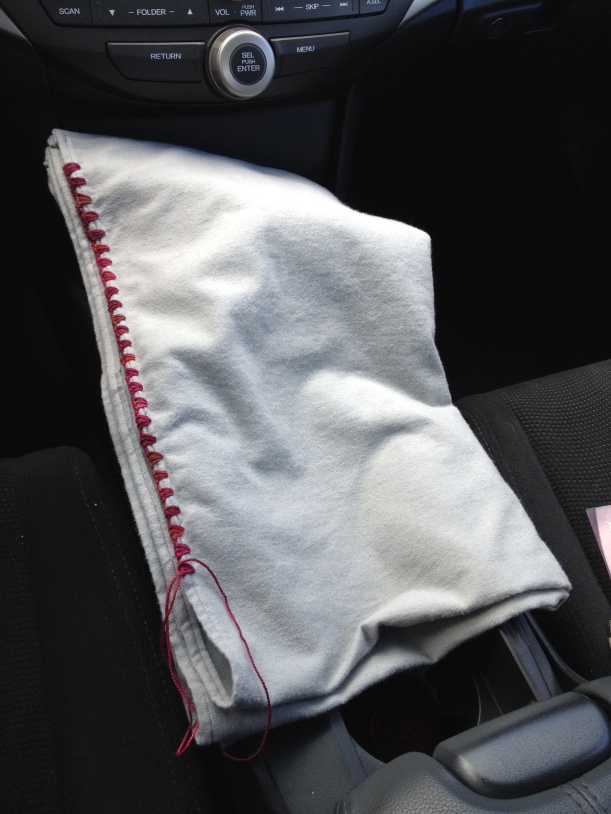